I've recently acquired a prototype of a Sega Mega Drive game that was never released, and now I'm proud to present a ROM dump of it. The game in question is Gensou Senki Kokou no Ryuu: Crying Dragon (幻想戦記孤高の龍 Crying Dragon). 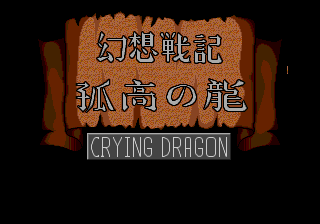 The game was originally announced by Sega as part of a line-up of early Sega Mega CD/Sega CD games given to Famitsu and listed in the 28 June 1991 issue, on page 14. (Note that this issue predates the Mega CD's 12 December Japanese release.) This lists the game to be tentatively published by Treco, a division of Sammy (the same Sammy who would eventually merge with Sega themselves) that specialized in publishing games on Sega's systems, usually in the US.

The prototype we have here is from very early in development. How early? Simple: so early the game is just a Mega Drive game on a standard Sega development cartridge with no traces of the Mega CD in sight: 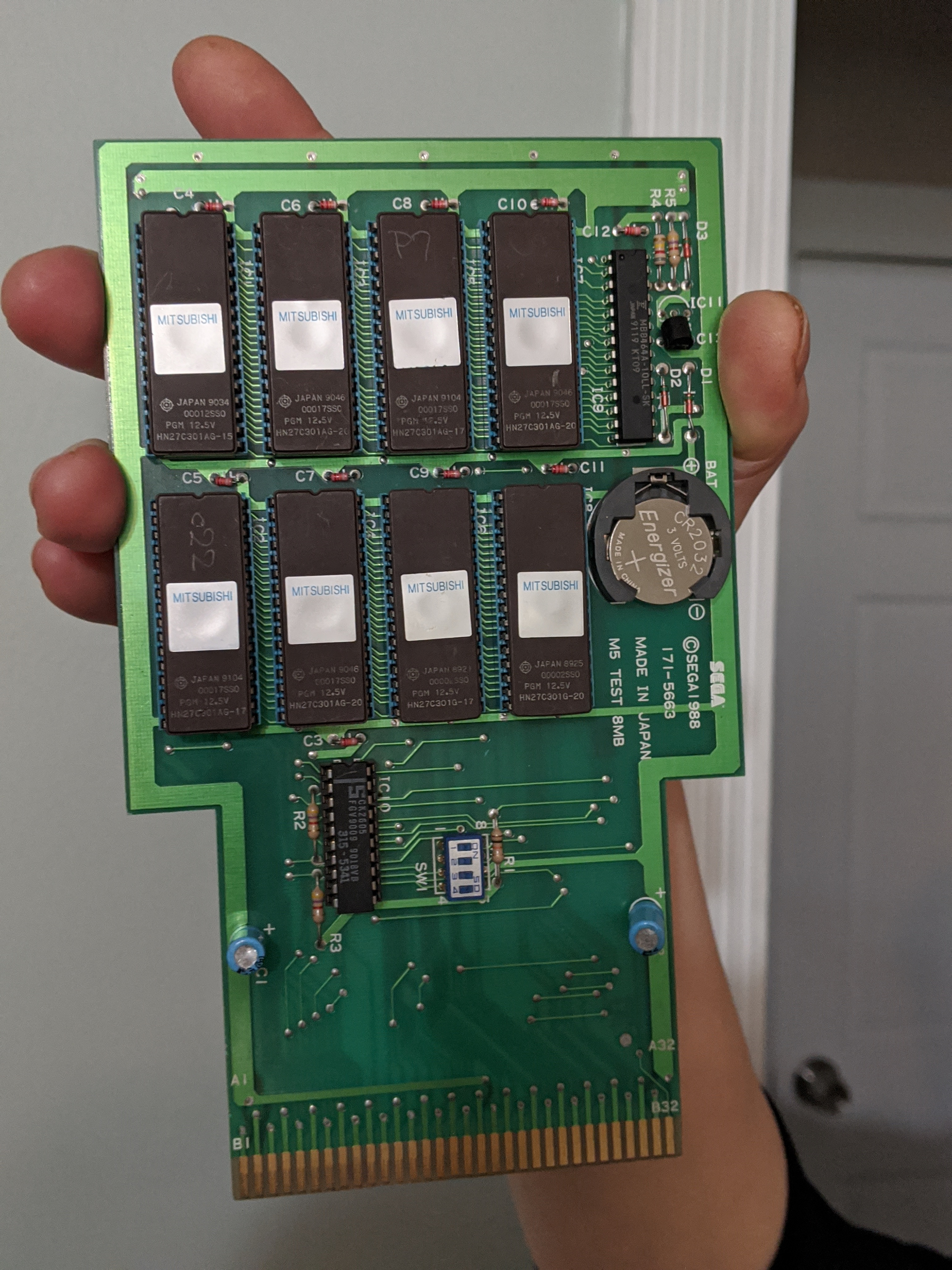 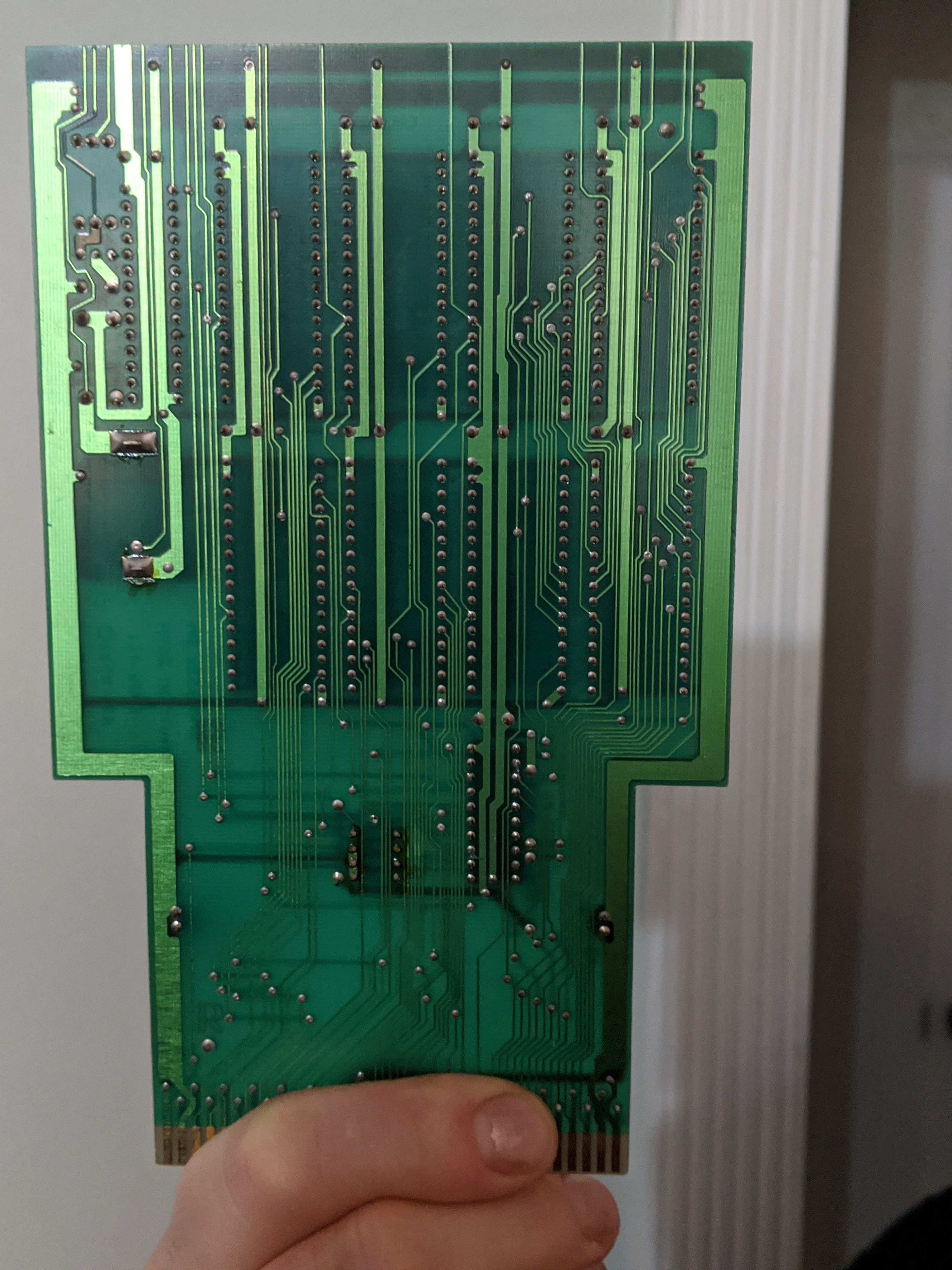 (My mom held the cart while I took the pictures.)

The game code doesn't even touch any Mega CD hardware, but we'll get back to that in a bit.

The game itself is a side-scrolling action RPG. The eBay listing where I got this from compared it to the Monster World games, which led some to extrapolate that the game was develped by Westone. I can say with some certainty that it was not, but again, we'll get to the technical details shortly. There are towns with shops, a 2D overworld, and side-scrolling levels, but not much in the way of story quite yet. There is an RPG-style status screen that you can access with the A button, but since I can't read Japanese I have no idea how to actually use it.

Here are some more screenshots from within the game. These were taken with Gens/GS r7, however the enemy graphics are indeed corrupt on real hardware exactly as they are in the emulator, so it's safe to assume that any other corruption is likewise correct. 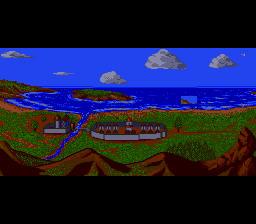 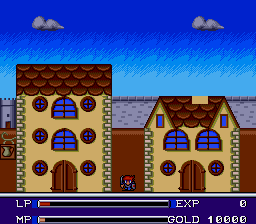 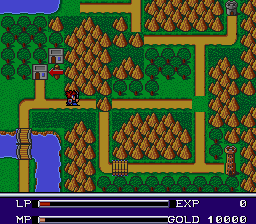 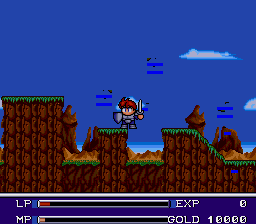 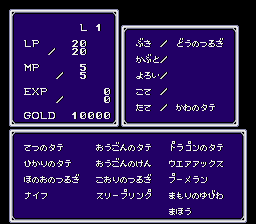 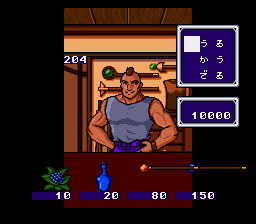 The main menu has three options, but only the first one actually seems to do anything. This opens another menu which allows you to choose a starting map. Choosing one opens a third menu, but I'm not sure how any of the options on it differ from each other. Someone who knows how to read Japanese will need to translate these menu options.

When you start the game, you'll be thrown into a town. You can move around and press Up to enter a building. Each building has a primiitve looking shop which after a brief period of time unceremoniously presents a menu where you can do shop-type things with. Again, I have no idea how any of this works, if anything even is working. (During my technical investigation I activated a shop screen where the merchant's face was corrupt, so.)

If you press A, the status screen will come up, but then the game will immediately kick you to the overworld map. You can move around, and walking over certain spots will throw you into a side-scrolling action stage. I don't know if or how you can skip this.

In these stages, C swings your sword and B jumps. Pressing Up and Down will make you act as if there is a ladder in mid-air, so if you do wind up falling into a pit (which you will inevitably do, since the game has no screen edge detection), you'll need to do this in order to get back out... assuming you didn't move left/right and walk underneath the level geometry first. You can swing your sword while on the invisible ladder, and enemies will be able to knock you off. The screen will lock once you get to the rightmost edge, but nothing seems to happen from that point on, and I don't know if there even is a way back out to the map. This is also the only game mode for which the Start button does something; it pauses the game, and there appears to be no hidden pause controls.

And now for the technical notes.

The game is 1MB in size, split into eight 1Mbit EEPROMs. These EEPROMs are all Hitachi 27C301s, which are not JEDEC-compliant, so I can't dump them directly with my TL866II Plus EEPROM programmer. (I may go back and try to do an EEPROM-level dump at some point in the future, perhaps using tricks like this one.) Instead, this dump was performed using an INLretro.

The ROM header identifies the game as ARM WRESTLING. This appears to indicate that the ROM header was not modified from that of stock Sega sample code, as this identifier is also used by a number of other prototypes, such as Ninja Gaiden and Street Fighter II' Turbo. (And no, the code style does not match either.)

I have tried reverse-engineering the game code to try to deduce the programmer's identity via code comparison, but it does not resemble any Mega Drive game code I've come across, despite some red herring similarities. There also does not appear to be any hidden credits or debug functions in the main loop screen mode.

This game is totally silent, but it does contain a SMPS Z80 type 1 sound driver, and even appears to have valid sound data associated with it. I tried loading the data into ValleyBell's SMPSPlay tool and it crashed, so I don't know what's going on there.

One thing you may notice in the photos of the cart above is that there's a CR2032 button-cell battery; on a commercial cartridge, this is indicative of the presence of SRAM for save data. And indeed, if I dump the prototype cartridge starting at the 2MB mark (which is where save memory is usually stored in the 68000 memory map), I get actual data! However, the game never looks at SRAM, so I have no idea what this does or what it's used for. I've included a dump of this data on this page as well. The data appears to be 8KB in size, which lines up with the tiny MB8464A-10LL-SK SRAM chip on the cartridge next to the battery. You'll notice the file below is double that size; that's because this chip is an 8-bit chip, and the Mega Drive uses a 16-bit data bus, so only every odd byte of the SRAM dump is valid, with every even byte being $FF. (This is normal for commercial games.)

And as mentioned earlier, this game's code doesn't touch Mega CD anything. It's likely the game was abandoned long before any Mega CD-specific parts were written.

The last chip on the cartridge is a Signetics CK2605 PLA. This PLA isn't dumped, but it was used by Sega in some arcade games, so I don't think it contains anything specific to this game?

With that out of the way, enjoy!